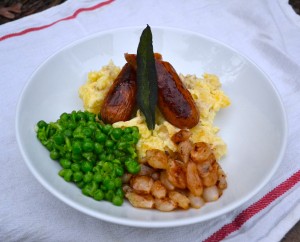 A hallmark of classic British food, bangers and mash have taken a turn for the upscale in recent years. But taking this famous meal out of the pub and into the fancy restaurant doesn’t make it any healthier.

Usually made with copious amounts of butter, fatty sausage, and rich gravy, traditionally prepared bangers and mash will leave you with a bellyache and in need of a nap.

This lighter, fresher version scrimps on neither flavour nor satisfaction, and makes for a comforting and nourishing meal. Leaving the skin on the potatoes adds a healthy does of fiber, and swapping Greek yogurt for butter gives the potatoes and mushy peas a pleasing tangy flavor.

When choosing a sausage, look for a leaner variety made with chicken or turkey rather than pork to keep the over all fat and calorie count low.